Stories from the field: Taliente

29 Apr Stories from the field: Taliente

Posted at 14:46h in Uncategorized by wpadmin 0 Comments
0 Likes

September 1998- September 1999
It was an important year for us, which gave us the opportunity to live an extraordinary experience with a people and its culture, hitherto unknown to us.
Tibet and its people “the Tibetans!” we arrived up there with such determination to see, understand and do; mutual feelings, as also they wanted to know, know and observe before giving their trust.

The Tibetan Khampa, inhabitant of the old Kham region of which Gamthog is part, with its red band between the

hair and the dagger at the waist, it inspires charm and awe, witness of a hard and dangerous life of the past times.
Gamthog is a village that lies on the banks of the Yangtze, natural border between the Tibetan Autonomous Region and Sichuan. Here he was realized the ASIA hospital, wanted by its founder Namkhai Norbu Rimpoche at the service of local population, started and managed by ASIA staff and subsequently by the government one
A year of intense work, sometimes heavy.

Thanks to the good collaboration established among healthcare personnel, we have been able to meet the increasing demand from patients coming from different districts and regions.
Our relationship with the residents in the meantime has consolidated, creating bonds of friendship between us that still persist, and in our year of shared life we felt more and more inhabitants of Gamthog with full rights.
It gave us satisfaction to see that even the nomads of the surrounding highlands had started to access to the care of our hospital. Among the many aspects of Tibetan life, that of the nomads seemed to us the heaviest, due to the rigid life they led and which unfortunately also led to a high infant mortality. 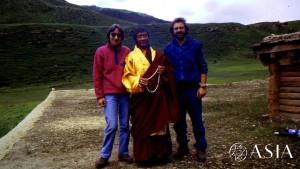 At that time Gamthog, like the other Tibetan rural areas, had no infrastructure such as: water, light, health, education, communication and good roads; obviously creating major management difficulties with the increasingly demand of the hospital.
ASIA, with its health and education projects, by building and managing a primary school and a hospital helped to considerably improve conditions in that area.

Its inhabitants, mainly barley growers and shepherds of Yak and goats, from childhood were forged to become strong adults, in our eyes sometimes excessive, ready to fight to wash an offense but never a lament in hospital where they often resorted to our care; sympathetic to each other and attentive to ours need with unexpected attention.
The daily life of all Tibetans seemed to us strongly linked to spirituality, among the people it was very common to make pilgrimages to monasteries to pray, ask for graces or thanking for receiving them; we too have done it and we have been lucky enough to meet wise and charismatic lamas.

It is difficult to remember an event more important than others, since many, too many, crowd our mind and are all worthy of being told. At eleven o’clock one evening they called us to assist a woman with a blocked birth. They accompanied us on the place and under the anxious gaze of his family, kneeling between her legs, finally at 3 am a beautiful healthy baby was pulled out with the suction cup. Mother and relatives were very relieved and we were happy even if with broken knees; surely this was the first step that made us acquire their estimate.
After 15 years we went back to Tibet. Gamthog has greatly expanded, there are many new houses and even public gardens on the river bank, but it is no longer accessible to non-resident population.

Our Tibetan friends of that time were waiting for us and at night a jeep overloaded with all of us they brought back there, where a party had been prepared. Now some young people speak English, so we could talk about our lives.
At midnight we toasted, laughed, and in goodbyes we wept. Returning to Derghe with a swollen heart we rediscovered how much affection had bound us.

Stories from the field>>